In addition to test equipment for PROFIBUS, PROFINET and AS-i networks, we also offer the versatile and useful range of Procentec PROFIBUS Hubs and Repeaters, including the A5 to B5 and new COMbricks. Following initial release of their IP65 rated Procentec ProfiHub A5, 5 channel repeater for outdoor installation, Procentec repackaged the associated A5 circuits into a smaller format for DIN rail mounting within equipment cabinets – this product, the Procentec ProfiHub B5, includes a solid earth rail for clamping of PROFIBUS cable screens, together with 9-pin D connectors for incoming and outgoing segment connection, or for monitoring of incoming and outgoing segment signals. Alternative screw terminal connectors are provided for incoming/outgoing main PROFIBUS segment connection, for each outgoing segment connection and for 10 to 32 volt DC power supply in each type of unit. Slide termination setting switches are fitted for the main and secondary segments in both the A5 and B5 units.

The ProfiHub A5 units may be supplied with optional heavy internal earth rails for clamping of cable screens. They may also be fitted with internal 110/230 volt AC mains to DC power modules : M12 connectors, instead of the standard cable glands, are also available.

The successful ProfiHub range has been further extended by release of the single channel Procentec B1 Repeater, allowing for dual power supplies, together with the very fast, robust PROFIBUS drive and isolation characteristics of both the ProfiHub A5 and B5 devices.

An IP65 rated single channel Procentec D1 Repeater has later released, with M12 connectors for PROFIBUS in and out signals and separate M8 for power. Press button terminator switches with LED indication are included for both incoming and outgoing channels. A separate M12 connector is included for ProfiTrace test connection onto the outgoing segment.

Further new variations of this product range have also been released in 2014 – including the B2+R IP20 rated, 1 channel in and 2 channel out repeater, as shown. This also includes the new dual source power connectors, an alarm output socket and switch for optional redundant designation of the two output sockets. Separate slide switches are included for setting of terminators on all three PROFIBUS channels. Further variations include the B2FO2+ and B4FO2+ repeaters which combine both copper and fibre optic channels with 2 copper + 2 fibre and 4 copper + 2 fibre respectively.

At the end of 2014 Procentec released its revolutionary ProfiSwitch x5 repeater. This 1 + 5 copper channel repeater, which looks very similar to the long established B5 unit, but now allows different PROFIBUS network speeds on all channels. This significantly new idea will allow connection, for example, of some slow segments maybe for older fixed slow speed slaves, or for maybe longer segments than might otherwise have been possible on faster networks. The adjacent illustration gives some idea of possible configurations.

During 2011, Procentec launched COMbricks modular repeaters with embedded ProfiTrace OE (ProfiTrace-over-Ethernet) for permanent  automatic network status monitoring. Each COMbricks head station can collect performance information from up to 4 separate PROFIBUS networks via local backplane, saving incident details to an SD memory card. Alarm reports may be sent by email via an Ethernet port. Both stored and real-time information can then be accessed by remote computers, using a normal browser program.

In addition to PROFIBUS DP channels, Fibre Optic, PROFIBUS PA and RS-485-IS channels may all be connected via appropriate COMbricks modules allowing for an extremely versatile range of network configurations, all with performance data logging and remote access.

We also offer Siemens PROFIBUS Repeaters, Active Terminators and other network components, in addition to a wide range of PROFIBUS and PROFINET cables and associated cable strip tools. 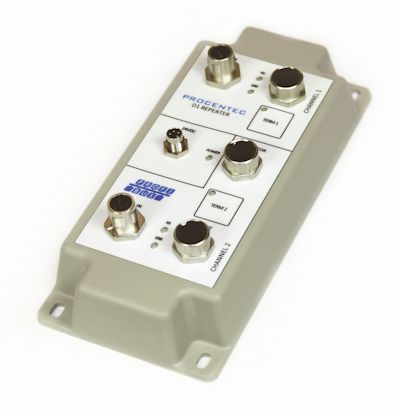